Most people are familiar with programs like Dropbox to backup and sync files, using what is called file based backup. However, disk imaging software such as True Image can backup a complete hard disk or partition, instead of just backing up personal files.

Disk imaging allows you to backup everything on your computer, making a copy (often called a clone) of the entire contents of your hard disk. While file based backup protects your personal files and folders, disk imaging not only backs up your personal files, but also your operating system, installed software and drivers, custom settings, and the setup to make your hard disk boot correctly.

Since disk imaging is more comprehensive than file backup, it also takes longer. It is less practical to maintain a continuously updated disk image, so disk imaging and file backups are best thought of as being complementary, with periodic disk images made for disaster recovery, and continuous file based backups made for personal files.

If your hard disk fails, you get a virus that you can’t get rid of, or you install a program or update that makes your system unstable, what are your recovery options?  If you have file based backup (but not disk imaging), then all your important files are backed up and nothing important is lost.  However, you still have to spend a lot of time restoring your system to where it was before.

If you have an issue with your system, rather than with individual files, usually your best option is to reinstall the operating system (OS) from scratch.  Doing a fresh OS reinstall is a slow process, typically with multiple update steps, and if you have lots of software installed (and lots of personal customization), it could take a couple of days to get back to where you left off.  In order to save yourself time (and often frustration) when restoring your computer, you might want to consider disk imaging as part of your backup plan.

If your computer becomes unstable after installing something, or gets a virus you can’t remove, you can restore your hard disk back to a previous image.  The restore process typically takes a couple of hours and then you are back to where you left off without too much trouble.

If your hard disk fails, you can order a new one and then restore the latest backup image to it.  Again, once you have the new disk, this process should take a couple of hours, instead of a couple of days.

If your laptop gets stolen or damaged, you can restore your existing configuration onto another computer.  However, be aware that restoring to a laptop with a different hardware configuration is only possible with some disk imaging tools, so check for this feature if it’s important to you.

Sometimes you may just want to roll back your system because it has become very slow over time.  This is a good reason to keep one or two old backup images for a year or more.

How Often Should I Backup?

You will probably want to make semi frequent disk (system) images so that when you need to use one, you will have a fairly up to date image to restore with. A monthly system image is advisable, or whenever you make significant system changes, like installing a new program.

Assuming you want to keep several old images, so that you have the option to restore to different points in time, you will want to consider the available backup schemes in whatever disk imaging tool you choose. The important thing to look for here is the ability to run incremental backups, which means each backup only saves the differences compared to the last backup. This saves a huge amount of disk space, since most system files will not change between each backup run. Even if you don’t need to keep multiple old backup images, you will still save a lot of time running incremental backups, since only a small part of the overall disk data will need to be transferred once the initial (large) backup is made.

The two notable downsides of disk imaging are that it takes up more space and is slower to run, compared to file based backup. As already noted, that is why it is best to think of disk imaging and file backups as complementary. 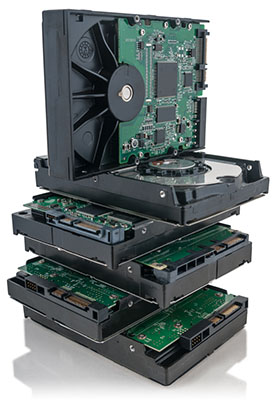 A new Windows install takes up around 20 GB (similar for Mac OS).  Add another 10-20 GB to that depending on what programs you have installed.  However, given you can get a 2 TB (2000 GB) hard disk for less than $100, that extra space isn’t as much of a concern as you might think.  Also, many disk imaging programs now automatically compress each image to save space. You will want to think twice before saving disk images remotely, due to their large size. If you do decide to make remote backups, it’s advisable to use a tool which does incremental backups to avoid large data transfers for each new backup.

It takes longer to create a disk image than a regular file based backup, since there is more data for the backup tool to process.  However, many disk imaging tools have gotten good at speeding up the process, by identifying where no changes occurred when making incremental backups.  Ultimately, the speed issue is a reason to run disk image backups less frequently than file backups, rather than not run them at all.  If you run file backups on an ongoing basis and disk images on a monthly basis, you should be well covered for both data loss and disaster recovery.

By combining continuous file backup on important personal files, and occasional disk imaging, you gain the benefits of both backup approaches.

Restoring My PC from a Backup

Restoring your system from a disk image is typically a straightforward process, with some tools being more user friendly than others.  When you create your first image, you will need to create a recovery disk.  This can either be saved to CD/DVD or placed on a USB flash drive.  To restore, you boot from the recovery disk, point to the location of your saved disk images, and select the image you want to restore.

The disk imaging software will then overwrite what is on your hard disk with whatever was saved when the disk image was made.  The location of your disk images could be an external USB drive, a network location or a cloud service.  Another particularly useful feature is restoring individual files within an image.  If something gets corrupted or deleted, you can access an old disk image and copy the file to your current setup.  This can save a lot of time when you only need to restore one or two files, but note that this feature is only available in some tools.

How Should I Choose Disk Imaging Software?

There are plenty of options when it comes to disk imaging software.  There are simple tools like the built-in system image creation in Windows Backup, which comes as part of Windows.  This allows for basic disk image creation and restore.  It’s best suited for very occasional use, since it doesn’t allow for scheduling, compression, or incremental backups. This means it will use much more space, and will not speed up for repeated use. Also, restoring from a disk failure using Windows Backup is a bit precarious.

There are several other disk imaging utilities with better functionality than Windows Backup.  Popular (and free) software includes EaseUS Todo Backup and AOMEI Backupper.  They are more user friendly, offer incremental backups, scheduling, disk cloning and other useful features.  However, these tools do not allow you to exclude files, so will still run much more slowly and use a lot of extra space if you have a lot of personal data that is backed up elsewhere.

If you expect to be creating disk image backups on a regular basis, you might want to consider one of the premium utilities, where you can expect to pay between $30 and $100.  Popular premium tools include Acronis True Image and Paragon Hard Disk Manager.  These offer file exclusion, automatic removal of old backups and partition management, as well as some other advanced features such as migration to different hardware. This last feature is useful if your laptop or PC gets stolen, so you can quickly restore your existing setup onto another computer with a different hardware configuration.

For a more detailed comparison of the pros and cons of different disk imaging software, see Best Disk Imaging Software.