Paragon Hard Disk Manager (HDM) is a decent choice of disk imaging tool if you also want general disk management features but don’t mind spending time learning how to use the software. As the name implies it offers a range of hard disk management features, so is not only for disk imaging. If you want to manage (e.g. create/merge/split/wipe) partitions as well as create disk image backups, then this is a good way to go, since you get these extra features for a similar cost to a dedicated imaging tool.

Its interface is less user friendly than Acronis True Image, and some might find it a bit dated. However, it also offers an “Express mode” interface, which is simpler and far more intuitive (although still not as polished as Acronis True Image). Part of the reason for the old interface is that Paragon has been around a long time (since 1994), making it one the oldest disk imaging tools that is still actively developed. Paragon has an impeccable and long standing reputation for making reliable software, which is a major selling point. You want to be confident you can restore all your old disk images, and minimize the risk of any corruption in your backups. 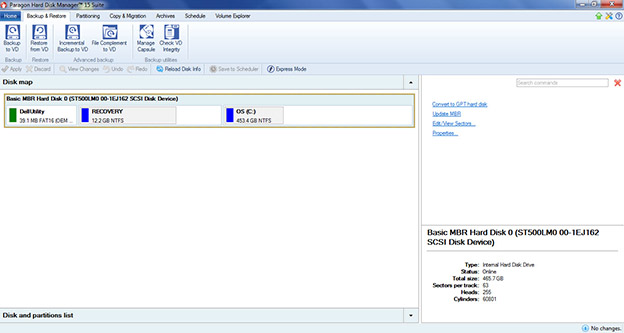 On the main window in full mode, you will tabs for “Backup & Restore” for creating and restoring disk images, “Partitioning” for managing partions, “Copy & Migration” for copying to a new hard disk, migrating the OS, or migrating to a virtual machine, “Archives” to verify and selectively restore from backups, “Schedule” to set up regular backup schedules and “Volume Explorer” to navigate your hard disks.

To create a disk image backup, select “Backup to VD” (where VD means virtual disk). You will be prompted with a setup wizard. I personally prefer having a selection of tabs that I can navigate between as done by Acronis True Image, but at least a wizard presents a logical flow for new users. 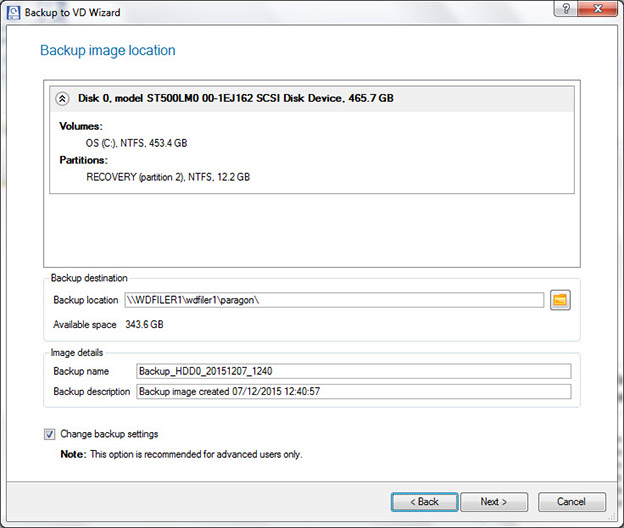 You select what you want to backup (e.g. disk volume, OS) and where to save your backup. Paragon HDM has something called a “Backup Capsule”, which is a separate backup partition you can create on your main hard drive. However, I prefer to keep my backups on a separate disk in case the whole disk fails, or the device is stolen. Here I am backing up to a network drive, and found the speed of navigation to network drive much snappier than Acronis True Image.

In advanced settings, you have a selection of virtual disk formats to save to (Paragon’s own PVHD format, VMWare VMDK, VHD and VHDX). This gives you a lot of flexibility is using your backup data outside of Paragon and means you are not tied to Paragon HDM for managing your backups. In comparison, Acronis True Image does not allow you to save to third party formats. However, note that compression and encryption options are only available in Paragon’s native format. 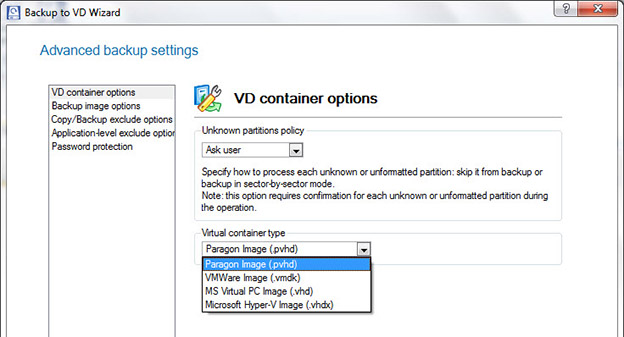 You can also select the level of compression to use (I’d leave this at the default), and change the image splitting options. By default it splits the backup images into chunks of 4GB files. You can disable it but it still appears to split the backup into larger chunks even with splitting disabled. Since Paragon Hard Disk Manager has a lot of history when it comes to reliability in restoring data, perhaps they found from experience that backups are more resilient when split up like this.

As with any decent premium disk imaging tool, you have the option to exclude files and folders from your backups. There are some pre populated filters for email data, executable files and temporary data. I would recommend enabling the auxiliary files filter, and adding one for personal data that you have backed up elsewhere. The executables filter is too broad for my liking (it excludes .exe, .dll and .drv files for Windows) but it’s not enabled by default and you are free to edit it. 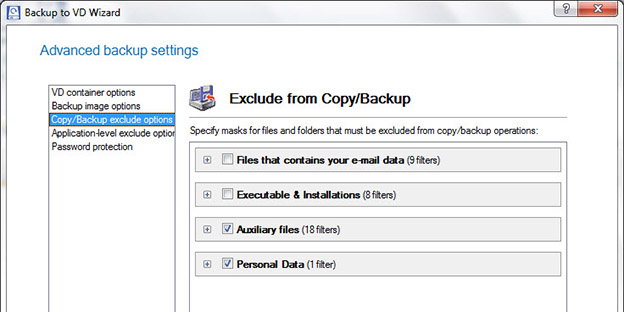 There is also the option to encrypt your disk image backup, which should be enabled during initial set up (available in advanced backup settings under “Password protection”). Like Acronis True Image, Paragon HDM offers AES-128, AES-192 and AES-256, depending on the strength of encryption you need.

Once you finish the wizard, you return to the main window to run your backup job. I found this part very unclear the first time I used the software. There is a small horizontal bar of buttons near the top, where you must click “Apply” to run the job. It’s not clear that this bar relates to your job, and they could at least change “Apply” to “Run” to make things a bit more obvious. In the same bar, there is also the option to “Save to Scheduler” where you set up a regular schedule to run your backup .. again this could be clearer and possibly included in the main setup form, but once you know how it works it’s no longer an issue. 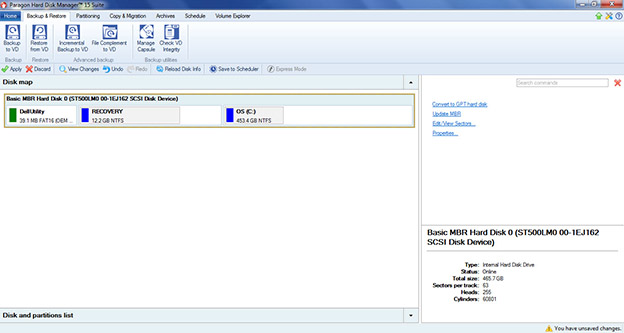 Absent from the setup process is a simple way to set up different backup schemes. You can run full and incremental backups and add to the scheduler once set up. It’s less automated and more confusing than Acronis True Image, and I didn’t see any option to create differential backups, although you can merge incremental backups with the parent (full) backup which is arguably more useful. One nice feature in Acronis True Image that is missing in Paragon HDM is the ability to automatically schedule a fixed number of incremental backups (followed by a new full backup), while deleting older backups automatically.

Recovering individual files is very straightforward. Browsing files to recover within the HDM interface is snappier compared than Acronis True Image. It gives multiple options of restore location which is useful (i.e. restore to original location, either replacing or keeping the original, or else restoring to a different location which you specify). 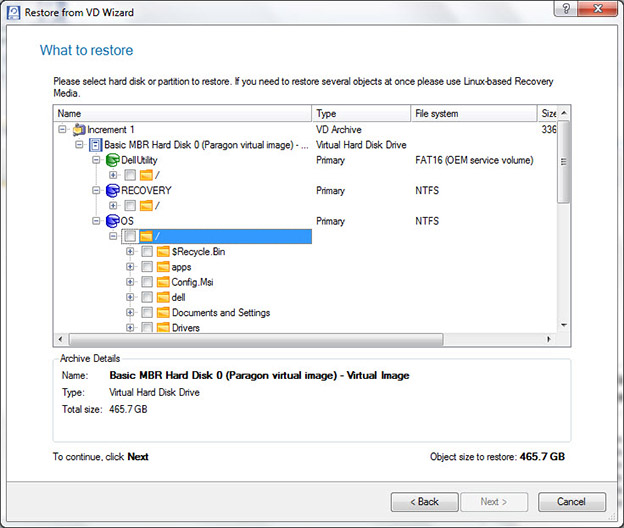 System recovery is the most important feature of all for disk imaging software (i.e. can you successfully recover your system from a backup after a disk failure?). This is one area where Paragon Hard Disk Manager performs strongly. With an good reputation for reliability, this is a robust tool for ensuring your backup data hasn’t been corrupted when it matters most.

As with any system imaging tool, you should setup your recovery media as soon as you’ve created your first backup. Similar to Acronis True Image, you have a couple of options for recovery media. For Windows systems, you can create Windows Preinstall Environment (PE) media, or linux recovery media – and save it to either CD/DVD or flash drive. I’d recommend creating the linux recovery media, as it is much easier to setup. However, make sure you test that it works and can find your hard disks and network adapter. If it fails to run, you can then setup the WinPE recovery media instead, where you’ll need to download a couple of third party utilities to get it up and running. It covers a widest range of hardware configurations.

The functionality to copy and migrate data are kept separate in the main interface, under “Copy & Migration” tab. You have the option to simply copy your existing disk to another (connected) physical disk. The “Migrate OS” option is mainly for solid state drives (SSD) which are smaller than the source disk, so you have options to exclude non essential files and unallocated space to fit a smaller disk, while ensuring everything is in place so the OS is still bootable.

If you want the flexibility to manage partition as well as make disk image backups in the same tool, Paragon HDM is a good option. You can create, resize, delete, format, split, merge and wipe partitions from the “Partitioning” tab. There are also options to set partition type, change the file system, run file system integrity checks, and test disk surface to find bad sectors.

In response to criticism that the full mode interface is overly complicated and confusing, Paragon has made “Express mode” available. This is a much more intuitive cut down feature set, which has big obvious buttons for everything a casual user would care about. 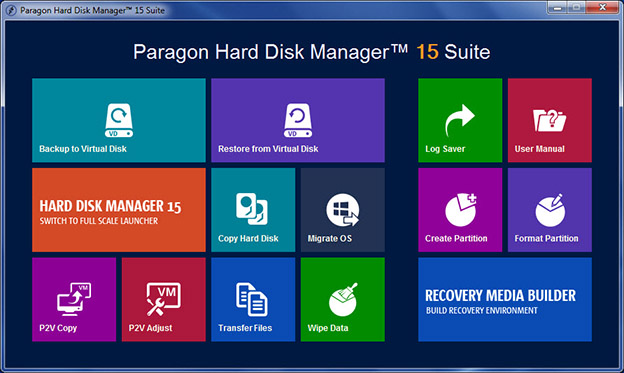 It goes a long way to address usability concerns, although it is still not nearly as polished as the Acronis True Image interface. Still, it makes the tool practical for casual users who want the extra functionality missing in other software, but find the full interface overwhelming.

As already mentioned, the non intuitive and often confusing user interface is probably the main downside of Paragon HDM. However, once you get used to it, it’s perfectly adequate. One place it falls down a bit is the inability to set and forget a scheduled backup scheme which creates multiple incremental backups followed by a full backup. You can occasionally go back and manually clean up your old backups instead though.

The documentation also leaves something to be desired. I found it poorly structured, often making it difficult to find what I was looking for. This is a minor criticism though, since all the features are adequately documented (once you find them).

Paragon Hard Disk Manager is a decent disk imaging tool, with a good range of advanced features, including extra functionality for more general disk management. If you want to both create disk image backups and manage partitions, this is a good choice of software. It falls down a bit in terms of usability of the main user interface, but ultimately it’s something that just takes a bit of getting used to. If you care about the reliability of your backup data (keeping it free from corruption), this is a good choice from the disk imaging software currently availability, given it’s long track record and good reputation.