O&O DiskImage is a newer entrant to the disk imaging space for Windows users, but is quickly developing a good reputation for reliability. DiskImage offers all the standard features we have come to expect in premium disk imaging tools. Since it’s a newer application, there isn’t a lot of legacy, so the user interface is up to date. I found I had to go searching for a few features so it’s not quite as intuitive as the more seasoned Acronis True Image, however it ultimately had all the features a typical user will care about and the backup speed is very competitive. 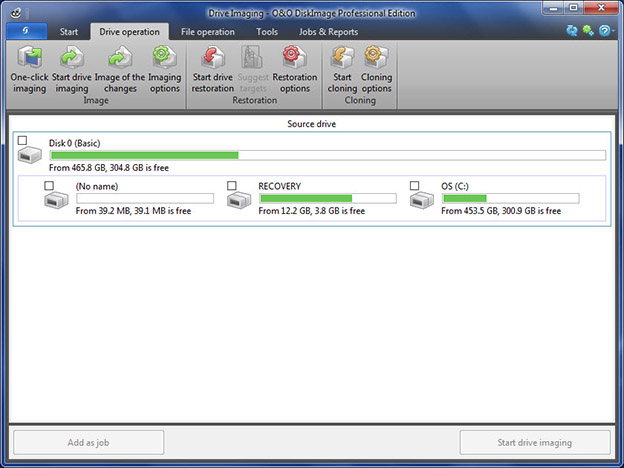 The simplest way to use DiskImage is to run a once off job, selecting “One-click imaging”, so as disk imaging tools go, it’s well suited to running occasional jobs manually with minimal effort. You can simply select the destination of your backup image and then kick off your backup job with no further configuration steps.

Even though one click imaging is an option, it is typically worth spending the time configuring at least some settings. If you are backing up your personal data (e.g. Documents folder) separately, then you will likely want to add exclusions for this data. You can do this by opening the “Imaging Options” window and adding exclusions from the Advanced tab. Interestingly O&O DiskImage also offers the option to exclude files from compression which is a feature I haven’t tested, but may be of interest for anyone with a lot of video files. 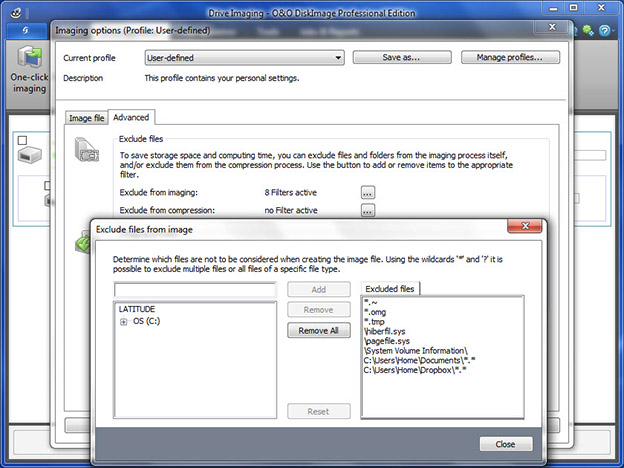 Similar to Paragon Hard Disk Manager, you have the option to create disk image backups in a third party format (i.e. VHD), however note that you lose some native features when doing this, namely the ability to compress and encrypt your backups. By default DiskImage only backs up used sectors (as you would expect), but there is also options to do what it terms “forensic” imaging which means it can image unsupported filesystems or encrypted hard drives. 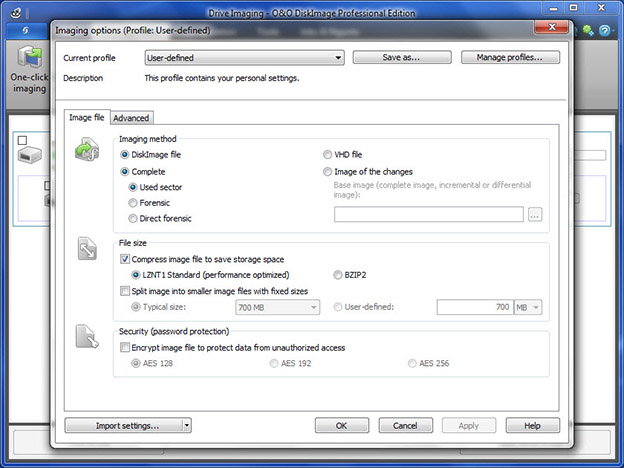 O&O DiskImage offers two standard compression algorithms (LZNT1 and BZIP2), and three AES encryption strengths (depending on how concerned you are about protecting your data). There is also an option to split your backup into multiple files.

Once you have made a full backup, in order to make incremental backups based on the previous full backup you need to select “Image of the changes” in the main window (or from the Imaging Options window) and manually select the path to the previous backup. This works fine but I found it lacks some of the polish in Acronis True Image where you can schedule it to automatically run incremental backups (say) 5 times and then another full backup, without having to concern yourself with where the previous backup was saved.

Scheduling backups to run on a regular basis is easy to set up, although not an integral part of the setup flow as with some other tools. When setting up a job, simply go to “Add as job” in the main window and you have a wide selection of job setup features. The main one you will likely care about is job scheduling. It provides the standard options to run daily (or certain days of the week, or X number of weeks). It also had an option to run automatically when a device is connected, which is an unusual feature and might be of interest to people who backup to a USB drive and just want it to run automatically whenever they connect this external hard drive. 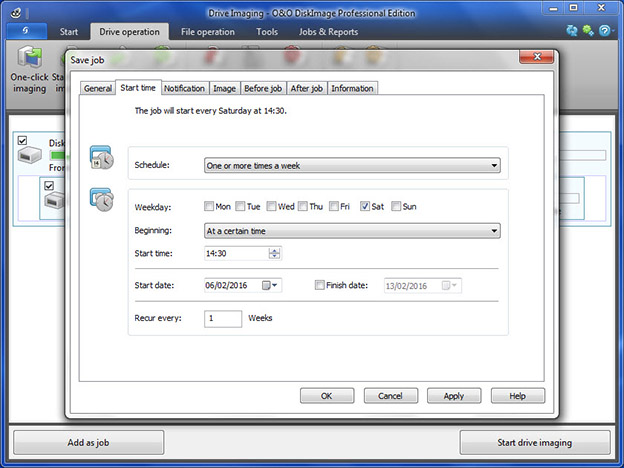 It has an option to setup email notifications although this is not a feature I have tested with this tool. The form provides the typical details for SMTP server credentials, and options of when you would like to receive email notifications. 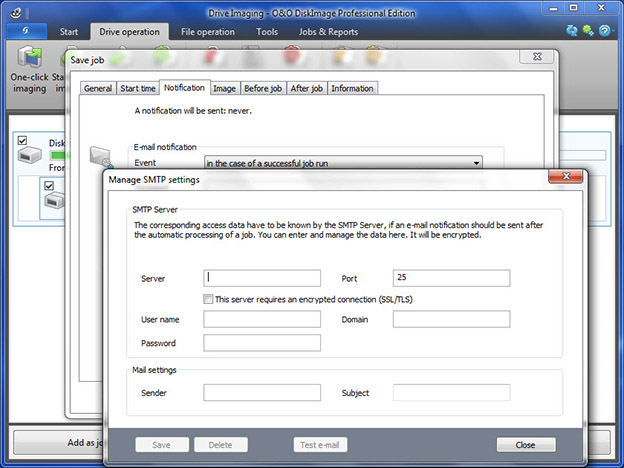 DiskImage allows you to run pre and post processing scripts for each backup job and allows an automatic shutdown or restart after the backup. However, it doesn’t appear to have the ability to block hibernation or standby during backup, so this is something you would want to disable in your computer’s power settings manually. 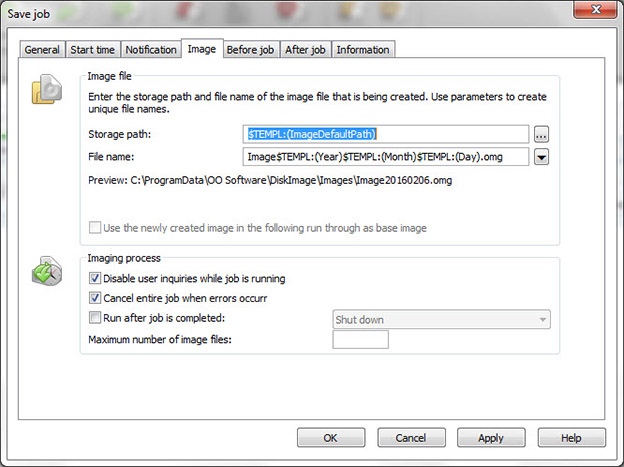 If you want to clone your old disk to a new disk, this is easily done. There are similar options with regular imaging, except you specify a destination disk to clone onto. You have options to clone used sectors or “forensic” mode for unsupported filesystems. There is also the option to filter out unwanted data during the cloning process. 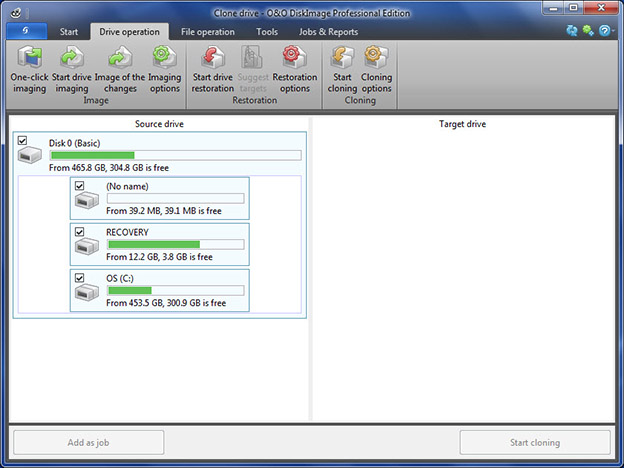 There are a couple of options for file recovery. There is a separate option to create a file (rather than image) backup, which creates a file with OBK extension. There is a tab in the main window to handle file backup and recovery so everything can be handled from there. 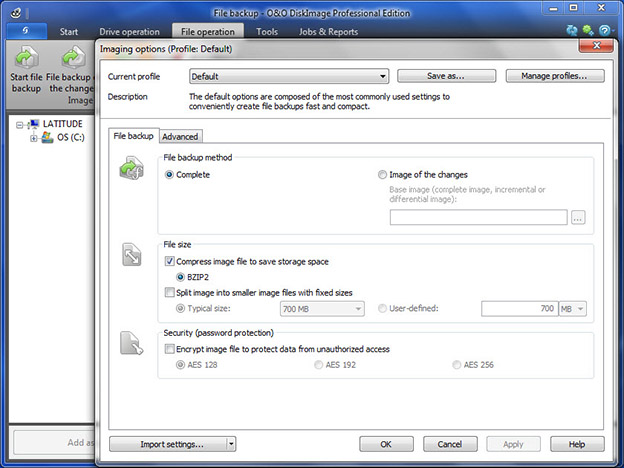 However, assuming that you want to recover individual files from a disk image backup (which is what I typically want to do), you can instead mount the image backup file (with OMG extension) as a separate drive and copy the files you want from the mounted drive. I found this process a bit haphazard the first time I tried it. I found that when went mounting the drive, it hadn’t installed the virtual disk drivers in the original installation so I need to install these and restart Windows. After a restart when I went to mount the drive it worked but it was quite slow in running the mount operation. I was a bit disappointed with the performance here, but on further consideration this might be a good thing. I find other tools can be a big sluggish with various operations where DiskImage was not, so my guess is DiskImage only runs virtual disk drivers when they are actually needed, making other operations more responsive.

When it comes to disk imaging tools, as always it is critical to create a rescue disk on a CD/DVD or USB flash drive. It provides several options here. By default it sets up the rescue disk using the Windows recovery environment, but you can also use the Windows Assessment and Deployment Kit (ADK) or Automated Installation Kit (AIK) which require downloading extra dependencies so is more complicated. Typically you will want to try running rescue disk first with the default recovery environment, and then if you have any issues with drivers, try ADK or AIK options instead. O&O DiskImage doesn’t offer any option to create a linux boot disk (which is often a simple option even for Windows recovery).

As already mentioned DiskImage is less well established than some of the older disk imaging tools, so doesn’t have the long track record that some backup software has. However, their reputation for reliability seems to be good so far.

The user interface isn’t quite a slick as Acronis True Image, but not really a major concern as I found the tool perfectly usable.

DiskImage does not provide a native cloud backup option, so this may be a reason to choose another tool if you prefer to backup to the cloud. However, note that you still can easily backup to existing cloud provider you are already using (e.g. Google Drive, Dropbox, Amazon S3), which may even be the preferred solution so that you can consolidate your cloud storage with a single service.

O&O DiskImage is a newer disk imaging backup tool that has developed a good reputation for usability and reliability. It performs backup operations efficiently and has all the major features expected with premium imaging software. The user interface is easy to use and is more responsive and less resource intensive than Acronis True Image, except for mounting backup images as virtual drives, where it is weaker. It’s a solid contender for a dedicated disk imaging tool with some good tradeoffs and a user interface that many will prefer when compared to longer established vendors.