EaseUS Todo Backup is likely the most popular free disk imaging software available, with the company claiming over 6 million users worldwide. One reason for the popularity of this backup utility is the advanced features set compared to equivalent free tools. This will be a good fit for many users. Todo Backup does incremental backups which saves disk space, and also has good backup plan settings, to create full and incremental backups, and handle automated removal of older backups to save space. However, as with most free imaging software, there is no option to exclude selected folders from backup. For folder backup, there is a “Smart Backup” feature which monitors changes and creates frequent backups when it detects changes.

The main window has options for Disk/Partition backup, File backup, System backup and Smart backup. As we are focusing on disk imaging functionality, we are mainly interested in Disk and System backup. Disk backup is for backing up an entire disk or selected partitions, whereas System backup will automatically choose partitions relevant to the currently running operating system. System backup is the simplest option if in doubt. 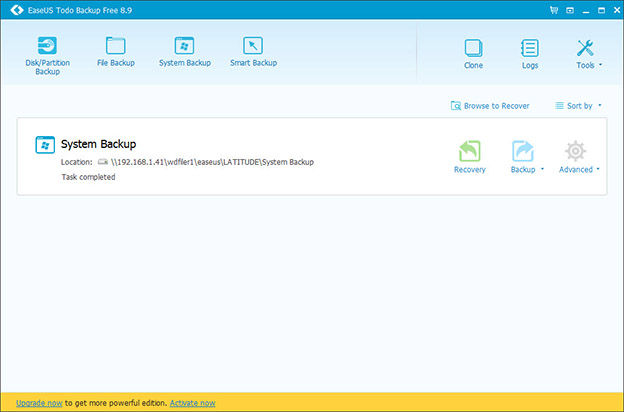 Once the source partitions are selected, one must select the destination, which can be on the local disk, a USB device or a network disk. Note there is also an option to backup to a cloud service but this is only available for file/folder backup. The supported cloud services are Dropbox, Google Drive and OneDrive. 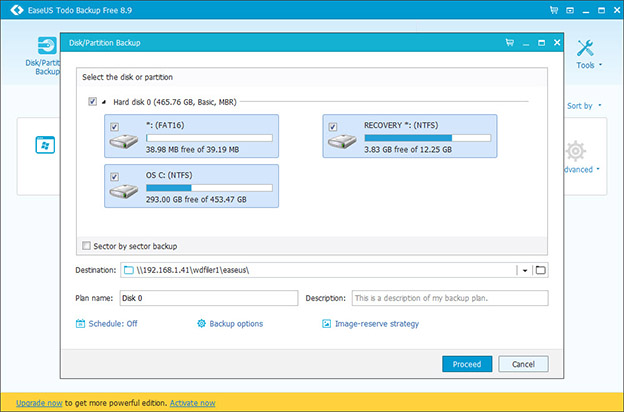 The main backup options are compression, encryption and backup priority. Compression has 4 levels which might be overkill. Encryption is fixed to 256 bit AES algorithm which is strong. Priority settings allow the priority of the job to be set. It allows you to set the backup job to a low priority if it’s slowing down your computer. The other priority setting is network bandwidth which can be a very useful feature for backing up over the network or to a cloud service. This option is not available in many free disk imaging tools. 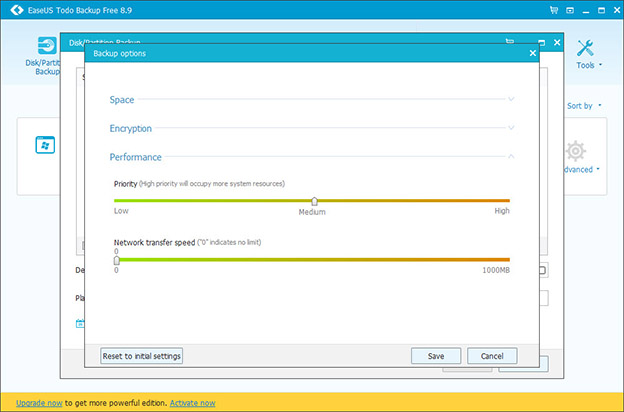 Todo Backup has the typical backup job scheduling options, for daily, weekly or monthly backup. However, it is more advanced than most free tools in that it also allows occasional full backups with more frequent incremental or differential backups. 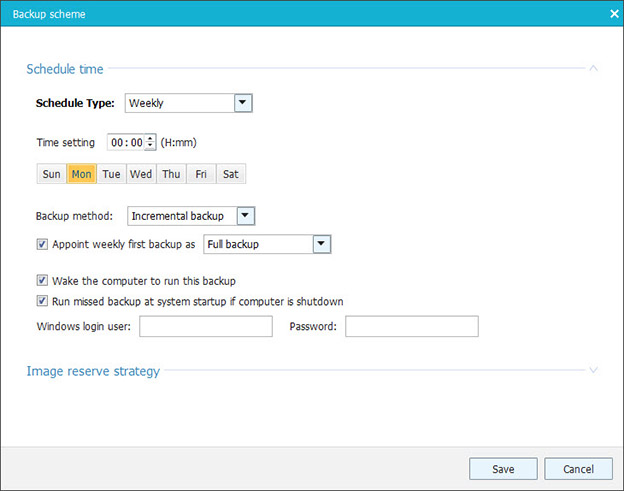 The tool also manages old backups through what it calls an “Image reserve strategy”. This is very useful to automatically delete older backups and retain the first backup. It also has an option to “reserve image via image merging” which is a handy feature to save space with older backups. It merges older incremental backups into a single backup, providing less granularity for old backups, while saving disk space. However, it is missing an option to delete old backups when running low on space which is a feature available in some other tools. 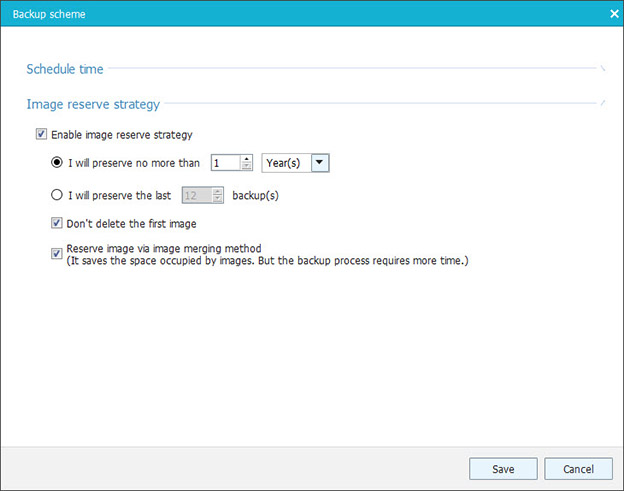 Recovering files from a backup image is straightforward by mounting the backup as a disk which can be browsed like a normal disk. This is accessed from Tools -> Mount/Unmount where individual partitions within the image backup can be mounted. It was perhaps a bit slower than some tools in performing the initial mount operation, but gave more feedback as to what it was doing than other tools. Note that some tools can occasionally hang for a short while during the mount operation, so this visual feedback is nice to see. I didn’t observe Todo Backup hanging during mount so seems to be fairly robust. 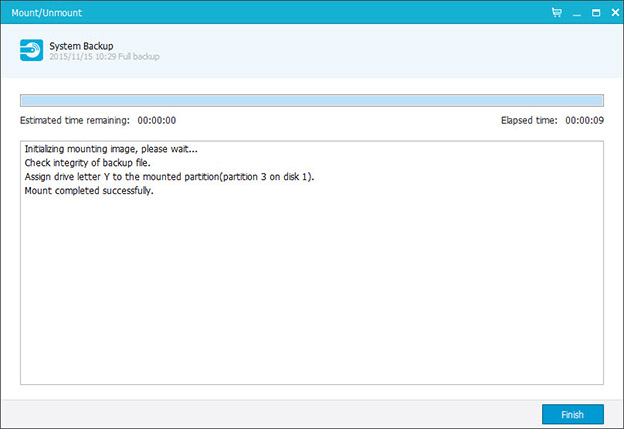 As with any system backup software, it’s important to create a bootable recovery disk. This is done via Tools -> Create Emergency Disk, which offers two options for creating a recovery disk. Similar to many tools, it has the option to create either a Linux or Windows PE recovery disk. It’s usually preferable to use the Windows PE disk so that all the drivers are included. I found the process for creating a Windows PE disk was not transparent. It was simple in that the only requirement was to select the option and click proceed. However, it took a very long time to complete compared to the linux option which only took a few seconds. My guess is it takes so long because it downloads and installs the preinstall environment in the background before creating the disk. It also doesn’t show what drivers are being injected, which I prefer to see so that I know all critical drivers are included in the recovery disk. Having said that the recovery disk worked fine once created, so this is a minor consideration. 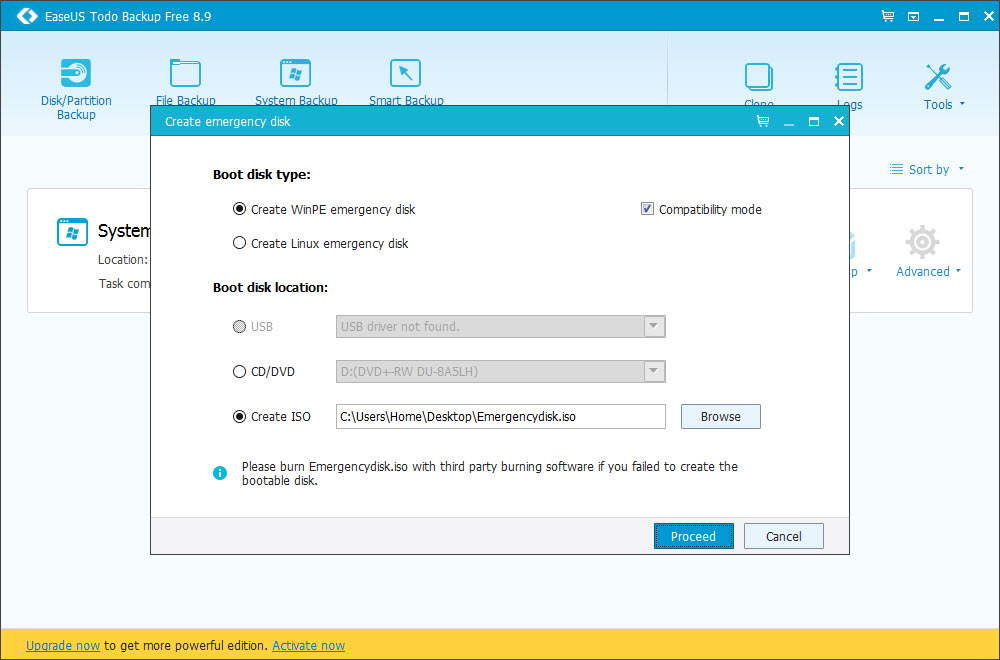 Todo Backup has the option to clone your existing disk or partition to a new physical disk, which is typically done to upgrade to a larger disk or SSD. This includes partition table and necessary setup to boot Windows so prevents the need to reinstall Windows on the new disk. It gives the option to resize the partition on the source disk which is quite useful, particularly if you intend to create separate partitions on the new disk. For some reason, there only appears to be an option to choose the entire disk (with all partitions) or an individual partition for cloning. I couldn’t find a way to copy 2 partitions while excluding another partition. In most cases, this is a minor issue though since copying either the full disk or the system partition are the most useful options. 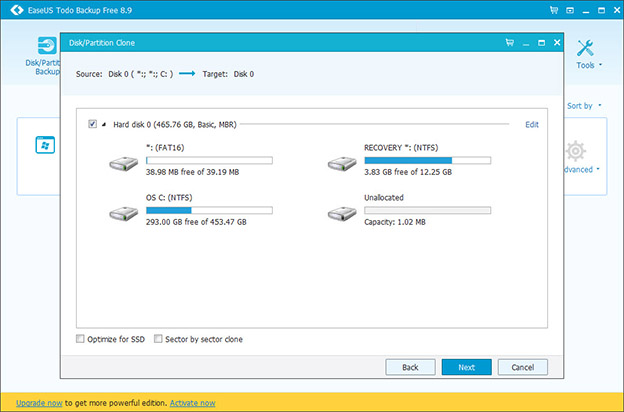 Similar to cloning in some other tools, there is an option to optimize for SSD performance, which should be chosen when cloning to SSD. There is also a (typically much slower) sector by sector clone, which is only normally used for copying from a disk with an unsupported filesystem.

Probably the main disadvantage of EaseUS Todo Backup is the lack of folder exclusion for backups. This is relevant when personal data is backed up elsewhere and excluding these folders avoids wasting space backing up redundant data. This is typical of most free imaging software while the feature is available in their premium version.

Note that Todo Backup uses a proprietary disk image format like many tools, and does not appear to offer the ability to export to a third party format.

EaseUS Todo Backup is a very popular free disk imaging tool which has an advanced set of features when compared with other free imaging software. It has incremental backup, advanced backup plan management and automated removal of old backups, which are key features for saving disk space and having a set and forget backup approach. Notably, it is missing a file/folder exclusion option which will lead to duplication of backup data with typical usage. There is also no email notification option. However, unlike some other free tools it has strong encryption and backup job priority management and bandwidth throttling. On balance, it probably has the strongest set of features for typical usage among the popular free disk imaging tools.