Here’s a review of the best disk imaging software in 2016. I’ve tested the most popular imaging utilities available, so hope you find this summary helpful. You can also find links to in-depth reviews below.

Disk imaging software is for making backups of your entire hard disk to restore to a previous state, e.g. to recover from malware, hardware failure or theft, or simply to restore a computer that is getting slow. It can also clone your system to a separate physical hard disk, e.g. to upgrade to a better disk (such as SSD). 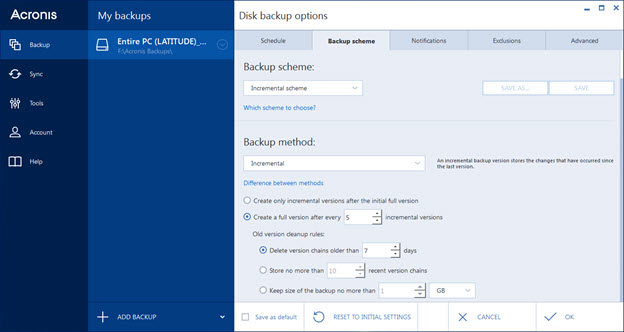 Acronis True Image has a polished user interface, using large buttons and menus. It is particularly straightforward and intuitive to use, where all key features are obvious and easily accessible. This will be appealing for people who want to spend minimal time learning how to use a new backup tool. It has all the advanced features expected in a premium disk imaging tool, e.g. advanced backup schemes and data retention rules, scheduling, file and folder exclusion, individual file recovery, migration to different hardware, and backup validation. Historically it has pioneered many of the advanced features now more commonly available. In tests, it had the fastest backup speeds, presumably due to better compression prior to transfer. It has an excellent track record for data integrity, but if in doubt, you have the option to run automatic validation, or validation on a schedule.

On the downside, it appears to be a bit more resource intensive than other disk imaging tools. This is unlikely to be a concern on more powerful hardware, but is something to consider when using an older computer. 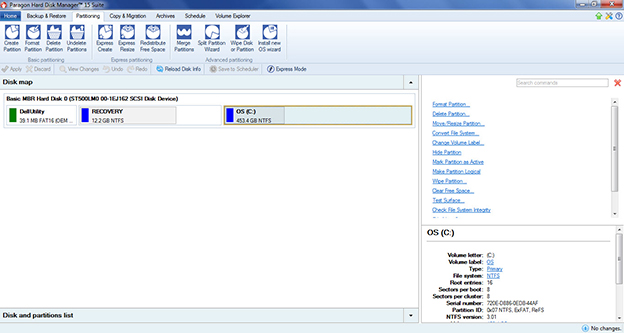 As the name implies, Hard Disk Manager provides a full suite of hard disk management tools. If you want to manage (e.g. resize or merge) partitions as well, you should consider Paragon Hard Disk Manager since you get this extra functionality. It also has most of the features available in Acronis True Image. It was a bit slower making backups (copying/compressing backup data) in tests, but the difference was small (e.g. a few minutes for a large 1.5 hour initial backup). There was no noticeable difference in speed when making incremental backups.

The main interface is a bit dated, with long menus and some obscure options that take a bit of getting used to, but it also has a newer “Express mode” which is easier to use for simple use cases. Hard Disk Manager has been around a long time and has a strong track record for backup data integrity. 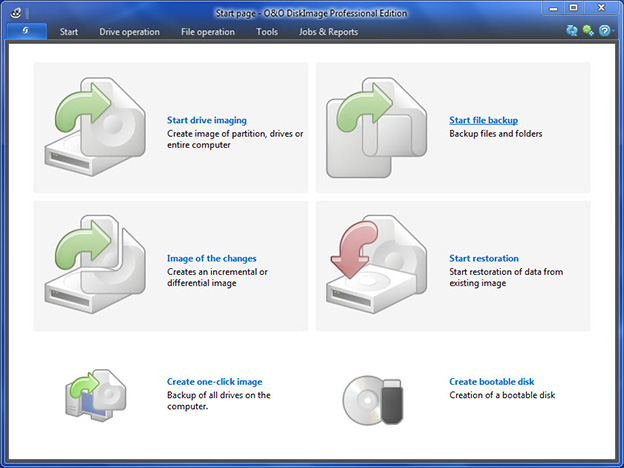 O&O DiskImage is a relatively new offering compared to long established tools from Acronis and Paragon, but this is a solid disk imaging tool which is quickly developing an good reputation. It’s probably best for people who prefer a more traditional interface, but still want a simple, easy to use tool with all the premium features. While Paragon Hard Disk Manager is fine for advanced users, it won’t appeal to people who want a tool that requires minimal setup effort.

I found O&O DiskImage was noticeably snappier for file navigation compared to Acronis True Image. It’s compression and default file exclusion (and hence backup speed) was a bit weaker than the Acronis and Paragon tools in tests, but the difference was fairly small, and is not really an issue for incremental backups. One minor niggle I had was that it defaults to local hard disk backup, while not making it clear that network or external drive backup is an option, although this is still easy to select. 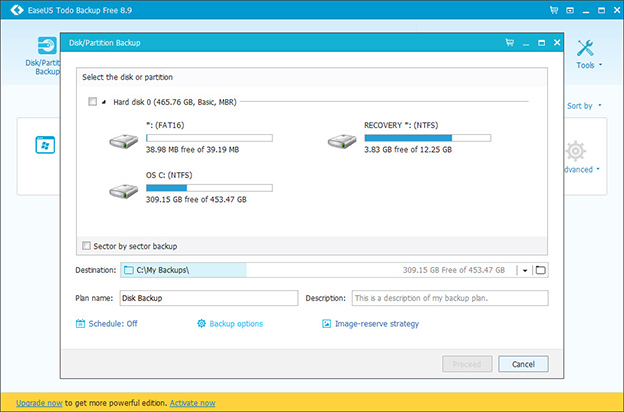 EaseUS Todo Backup is a completely free disk imaging tool, but offers many advanced features out of the box. It’s possibly the most widely used free disk imaging tool out there, with over 6 million users. Perhaps most importantly, it allows incremental backups. It also offers a range of compression options, encryption, prioritization and network transfer speed limiting, as well as backup scheduling.

However, one key feature that is missing is the ability to exclude specific files and folders from backup. The backup approach I recommend is to run occasional disk image backups which exclude personal files, while running very frequent backups of personal files using something like Dropbox or SyncBack. In my test usage, the inability to exclude personal data made the backup time increase to 3.5 hours (from 1.5 hours with other tools). This may be sufficient if you don’t want to backup personal data separately from your disk image backups.

Other premium features missing from this tool are the ability to transfer your disk image to another PC, and migrate to a virtual machine, so make sure these aren’t features you expect to require down the line if you choose this tool. 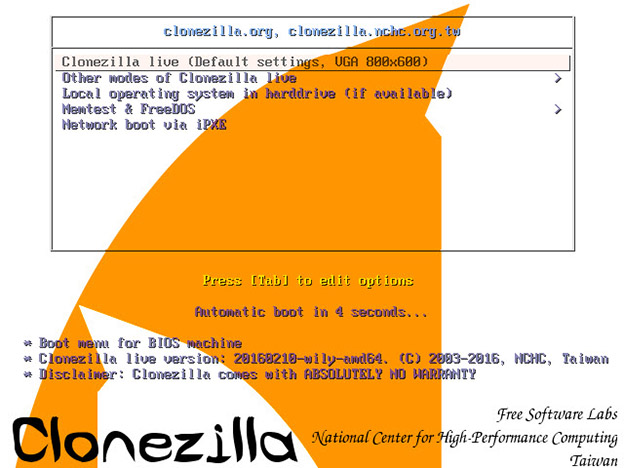 Clonezilla is a widely used free and open source utility, but is very different from most other disk imaging software. Typically it is run from a bootable linux disk (or can be run from a server with advanced configuration). Clonezilla contrasts with other imaging software in that it requires manual operation for casual use and can’t be run within the installed OS. Since it can’t be run in the background, backup jobs cannot be scheduled in the usual manner. It also doesn’t support incremental backups or file exclusion. All these factors make it unappealing for a lot of people.

However, it is built on a robust set of open source Linux utilities that are long established and well trusted for data integrity. It offers a wide selection of cloning and compression utilities, and uses the widely used and respected eCryptfs utility for encryption. It also supports an unusually large number of file systems which is good for Linux users. 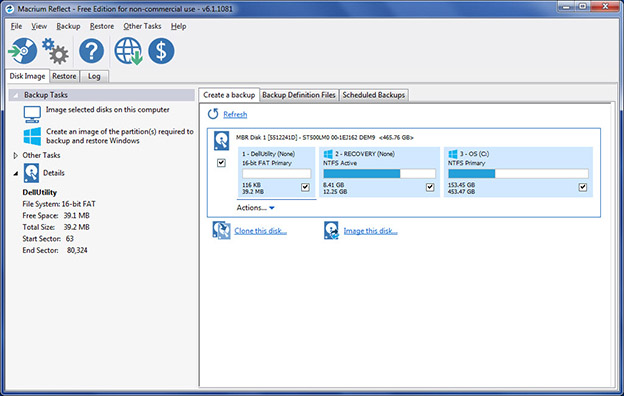 Macrium Reflect Free is one of the more polished free disk imaging tool currently on the market. The user interface is intuitive, and is quite snappy and responsive, compared to some tools which can be a bit clunky in places. However, it is missing several important features – most notably incremental backups, file exclusion and encryption. Macrium Reflect has better than average backup plan and data retention settings. I also liked how its recovery disk setup utility gives a lot of visibility into what drivers are included. This gives a lot of confidence that the recovery media will work as expected, although it’s always advisable to test this after initial setup.

There is also a paid version of Macrium Reflect with all the typical advanced disk imaging features, although it is a bit more expensive than other popular backup tools. 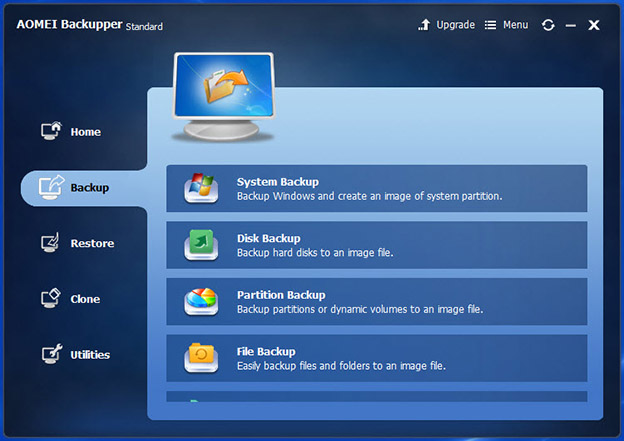 AOMEI Backupper is another decent free disk imaging tool. It has similar features and functionality when compared with other free utilities. It has incremental backups, compression, encryption, scheduling and data validation. Similar to EaseUS Todo Backup and Macrium Reflect, it does not offer file exclusion in the free version, which will be an unacceptable limitation for many (as it can greatly reduce backup time and size). One feature missing from AOMEI Backupper is the ability to migrate your hard disk on the same computer (e.g. when upgrading to an SSD), whereas this is available in other tools.

However AOMEI Backupper has good file restore options, which is missing in EaseUS Todo Backup. Whereas Todo Backup only allows a full system restore, AOMEI Backupper allows you to restore individual files and folders. This will be a critical feature for many. If you care about incremental backups and don’t mind missing out on the slicker interface, AOMEI Backupper might be a good choice compared to Macrium Reflect.