AOMEI Backupper is one of the more popular disk imaging tools available. It’s straightforward to use and has a good range of features for a free tool. Some of its strong points are the availability of incremental backups and free customer support. It also has AES encryption, allows email notification and does system cloning. Interestingly it also has a folder syncing feature so that some folders can be synchronized to a backup location. This is useful to backup personal data separately to disk image backups.

The main screen has several backup options. There is System backup, Disk backup and Partition backup for disk imaging. It’s arguably not critical to have these different options but may be useful for novice users. The System backup will automatically backup all partitions needed for Windows and OS recovery. Disk cloning is to clone a full disk (including all partitions), whereas Partition backup gives the option to select individual or multiple partitions for backup. Some other tools don’t make this distinction and allows the user to select all the partitions they care about from the main window instead. 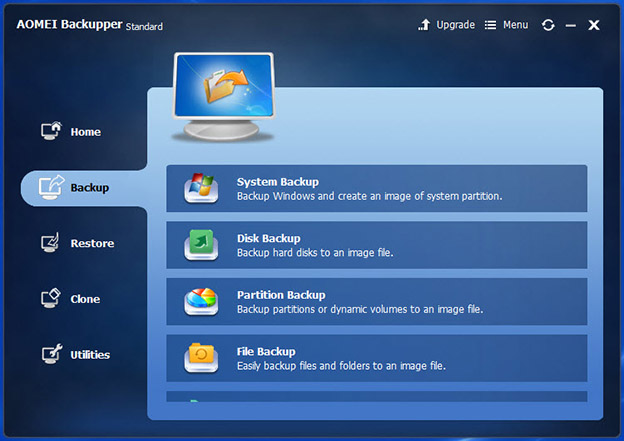 If in doubt the recommended option is System backup. Backupper will automatically select the system partitions and then you need to specify the backup location. As with other tools, the destination can be on the local disk, an external USB disk or a network attached storage device. 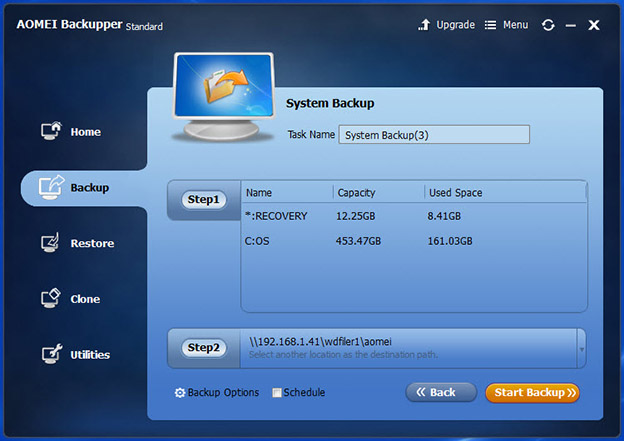 Once the source and backup destination are specified, there are other backup settings available under “Backup options”. AES encryption can be enabled by specifying a password. There only appears to be one strength of encryption available but this is likely sufficient for most people. There is also an option to specify email notifications when a backup completes or fails. Note that in the free version, you must use AOMEI’s SMTP email server but in the paid version, it allows a custom SMTP server to be specified. There are some other options that will typically be left at the default, notably the compression level, how to split backup files, and whether to backup used sectors only vs. exact sector by sector backup. 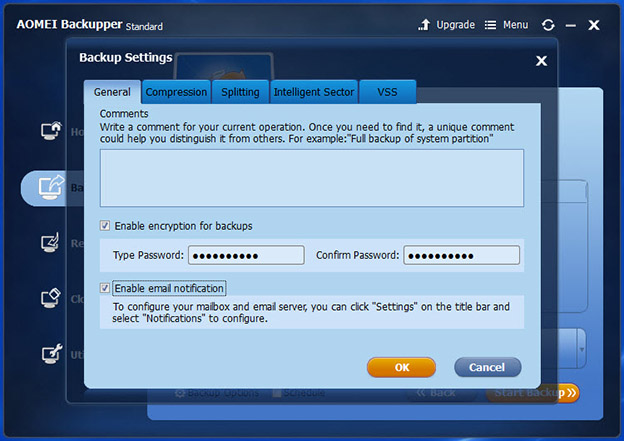 AOMEI Backupper has standard backup job scheduling functionality so that backups can be kept up to date. A schedule can be specified when setting up a new backup job, or for a previously run job. Jobs can be run daily, weekly or monthly. There is also an option to run at intervals of hours during a specified time period, although this is probably only useful for the file sync feature. 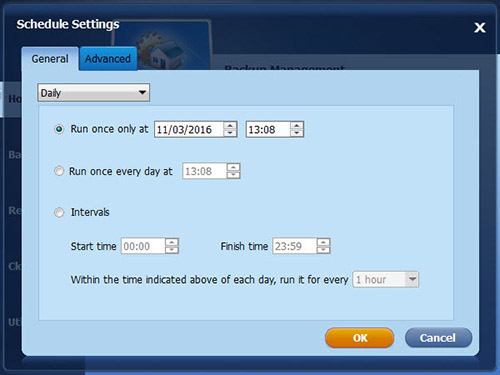 The type of backup can be specified as part of the schedule, with options of full, incremental and differential backup. Incremental backup is usually the best option as it is the most efficient method and saves a lot of disk space.

One feature that is absent is the ability to create a more advanced backup plan, where for example you might want to run a full backup occasionally and incremental backups in between. Also missing is an automated way to discard older backups, e.g. deleting backups older than a year (or when running low on disk space). If you are looking for a tool for occasional use or are comfortable manually cleaning up old backups from time to time, this shouldn’t be a problem but is something to consider if you want a set and forget backup solution.

Individual files can easily be recovered using the “Explore Image” feature in the utilities tab. It is also available as an option when accessing individual backups. This allows individual backup images to be mounted as a drive which can then be accessed from Windows Explorer, to find the files that need to be recovered. The drivers to mount backup images come installed with the tool and the mount process is quite straightforward and seamless. 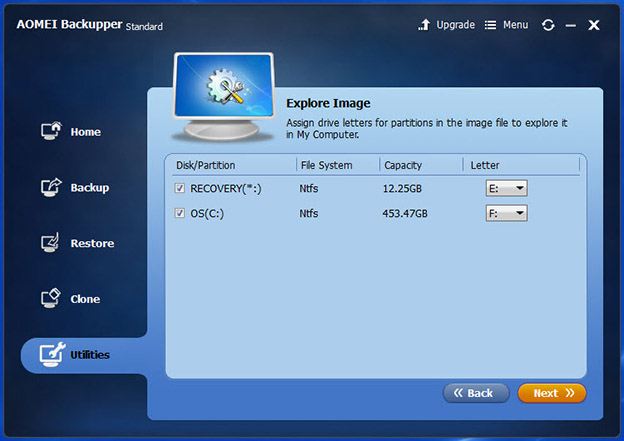 It’s advisable to create a bootable recovery disk, to allow backup images to be used for recovery in case of major system issues. Two options are available when creating a recovery disk – a linux boot disk and a Windows PE disk. The linux boot disk is the default option and is simpler to setup, however I’d recommend going with the Windows PE disk as it will ensure drivers are available for all available hardware. It is a bit more effort to set up, since the Windows PE installation must be run separately before it can be used. 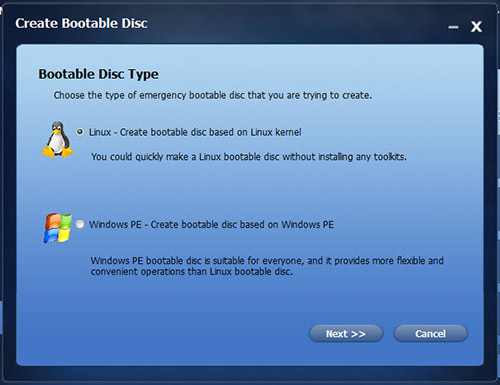 Backupper supports disk cloning where an existing disk or partition can be copied directly to another physical hard disk. Similar to how the disk imaging options are listed in the main backup window, disk cloning has three separate options – Disk clone, System clone and Partition clone. Disk clone is for copying an entire disk, System clone will copy only the partitions relevant to your operating system, whereas Partition clone is to copy a single partition only. 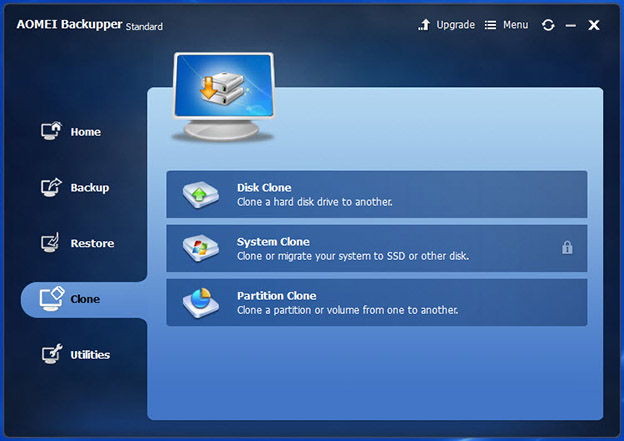 Note that most people will want to use System clone as it automatically selects and copies the operating system partitions, which in normal usage also contain all user data, so it should have everything a user will care about. However, in the free version you are required to share/promote AOMEI Backupper through social media to unlock this feature. In practice for most people, System clone and Disk clone will do the same thing unless the user has created extra partitions themselves, so the distinction is not that important.

Backupper lacks advanced backup plan features to create occasional full backups with incremental backups in between, while deleting old backups automatically. These features are available in some other disk imaging software and will appeal to people who want to setup their backups once and have them operate with maximum efficiency in the background.

Backup image files are created in AOMEI’s proprietary image format. There is no option to convert this to an external format, so backups are tied to the tool. Typically this won’t be a problem but something to be aware of if you are uncomfortable having your backup data in a proprietary format.

There is no option to exclude files and folders from a disk image backup. If you have personal files which are backed up elsewhere, this is a desirable feature to avoid wasting disk space duplicating backups.

AOMEI Backupper is a solid, popular and free disk imaging tool with most features users will care about. Importantly, it does incremental backups which will save a lot of disk space when making frequent backups. It has encryption and email notification for backup jobs. It does disk cloning to directly copy from one disk to another. While it has basic job scheduling to automate frequent backups, it lacks an advanced backup plan to alternate between full and incremental backups, and delete old backups. The user interface is simple and easy to understand, geared toward novice users. Backupper offers free technical support, which is unusual for a free tool, and might be particularly appealing to anyone with limited computer knowledge.